The location of the first golf course at Norwich, Connecticut, was near the old home lot of Benedict Arnold. A rector of one of the Episcopal Churches in Norwich and a young golf enthusiast, who lived at the old Benedict Arnold place, laid out a six-hole golf course beginning in the backyard of Arnold’s old home. These two enthusiasts slowly gained recruits… among them some women. The first course had in one of its fairways a ledge. This ledge was used in Indian times as a place where Indians ground their corn and the mortar holes were visible in the ledge.

The first tournament of which we have authentic information was in November, 1896, proven by the existence of a small silver cup which for a number of years was contested for. On it is engraved the names of the winners, dates, and their score.

This course and two succeeding courses which were in the same general locality were laid out in a rough rock country adjacent to the residential district lying between the city of Norwich and Norwich Town Green.

In the archives of the club there is a score card of the third course. This course was 2707 yards in length. the score card does not show what par was in use at that time. The bogey system was the criterion of excellence. The back of the card is filled with local rules and penalties for lifting. A note at the bottom announces that hole number one has no local rule.

The fourth course of nine holes was laid out 80 acres acquired by the Norwich Golf Land Company for golf purposes at a point about three miles south of the center of the city (the site of the current course).

On March 12th 1924 the Governors of Norwich Golf Club authorized the Norwich Golf Land Corporation to purchase additional land. It was stated that the “land has been characterized by a celebrated golf course architect and constructor as the finest natural golf land he has seen in this State and the equal of any in the country”. At that meeting on March 12th 1924 it was further reported “Blueprints of the proposed new layout gotten out by Tull & Tull, well known golf architects, with whom is associated Walter J. Travis veteran golfer and now designer of courses were exhibited. If sufficient money is raised Mr. Travis will polish off the plans, otherwise Tull & Tull, who are entirely competent to act, will do all the work.”

On April 19th 1924 the Norwich Bulletin (newspaper) reports that the course plans were changed and new land acquired including the Connelly farm of 31 acres, 11 acres of the Elmer Pierson farm, and 18 acres of the James Allen farm. [The new plans were considerably different from the original plans. It is not known whether these changes were because of the review by Walter Travis or just changes instigated by Tull & Tull or the Norwich Golf Club]. Work started in May 1924. The course opened Saturday July 4th 1925. 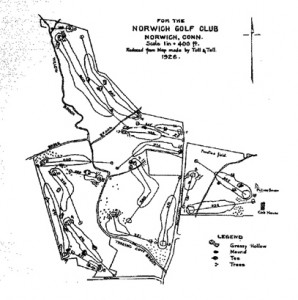 There has been a lot of speculation that the course was designed by Donald Ross. While many characteristics of the course are similar to Donald Ross designs there is no evidence that he participated in the design of the course.

The fourth course was laid out in 1910 on about 80 acres acquired by the Norwich Golf Land Company for golf purposes at a point about three miles south of the center of the city (this 80 acres is part of the current course).

This locality was at some time… many years ago…a level plain, later to be eroded by the drainage of Trading Cove Brook and its tributaries. This erosion has left knolls, ridges, ravines, gullies and such like…obstacles which make attractive and interesting hazards. The locality was at one time a favorite camping place for the Mohegan Indians. The name Trading Cove Brook was derived from the fact that a salt water cove nearby was a trading point between the Indians and the Whites.

There is conflicting information on who designed this course. In one instance it is stated “The course has been laid out practically as suggested by R.H Pryde of N.H.” (This probably refers to R.D. Pryde a professional in charge of Yale Golf Club and New Haven Country Club). Later it is stated “The links were laid out by Willis Austin, with the assistance of R.D. Pryde, a professional from New Haven.” It appears that both Willis Austin and R.D. Pryde cooperated on the design but it is not clear which was the major influence.

On this course there were many blind holes; six out of the nine being blind…. two from the tee and four from the proper position to play the approach shot. The condition of the terrain at this place was much superior to the terrain of the first three courses in view of the absence of rock and property lines designated by walls over which the club members on the old three courses had to play.

1st hole: Played backwards on the existing 16th (current 16th tee being the green and green being the tee).

3rd hole: The location of the tee is unknown. The green was to the left of the existing 3rd fairway at the bend near the bunker. The outline of the green can still be seen.

4th hole: Played from the old tee behind the existing 10th tee, across the brook to the left of the existing 9th green. The green was probably at the base of the hill leading up to the existing 8th tee.

5th hole: Played from a tee located near the existing short 8th tee (white tees) down through the gulley, across the existing 9th and 4th fairways to the green that was located in the wide area to the right of the existing 4th fairway, just after crossing the brook.

8th hole: The tee is still visible on the rise to the left and just short of the existing 1st green. The hole was played to a green that was in the wide area to the left of the existing 3rd fairway, about 100 yards from the men’s tee (near the area of the current chipping green).

Play continued on the original 9 hole course during the summer of 1924 as the new course was being built. A temporary 6th green was used starting September 2, 1924. By September 13th the fairways and tees had been seeded and “Stolens” was used to seed the greens which were completed By September 22, 1924. Apparently there was some restricted play on the course (possibly to the old greens or temporary greens) in the Spring of 1925 since there were reports of “Match play at the course on June 2, 1925 and a “Memorial Day Program” with “special rules in effect due to the construction of the new 18 hole course”.